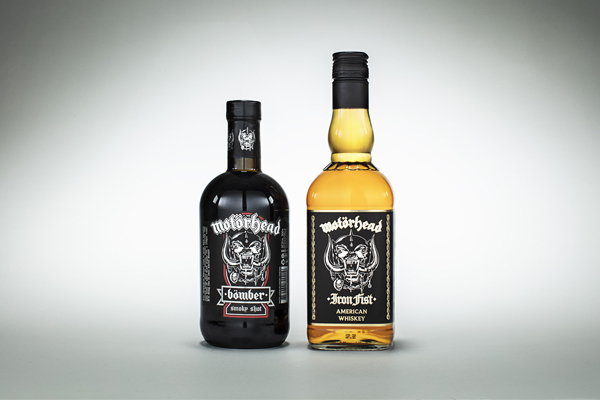 Some truly classic songs have named these highly anticipated new releases. One is the American whiskey Iron Fist and the other is a unique shot named Motörhead Bömber.

Specially selected herbs, an intense, smoky charcoal with hints of spicy black peppar and a good pinch of rock’n’roll. These are the ingredients that make Motörhead Bömber different from any shot you ever had before.

To make sure it lived up to the band’s legendary status a group of dedicated rockers and drinkers got invited to a very special event. Their honorable mission: to make a shot for the Motörhead fans of the world under the guidance from master blender Daniel Henriksson. And they surely succeeded with their assignment. Whether you’re in the middle of a wild party or having a quiet barbeque – this is the perfect shot to raise in honor of Lemmy.

As if that wasn’t enough, there is another great release coming up. This one’s an American prime whisky named after one of Motörhead’s most classical songs and albums – Iron Fist. As we all know, Lemmy didn’t only love rock’n’roll at the loudest volume possible, he was also a big fan of American whiskey and had a dream to one day develop his own brand. In 2014, Lemmy and Motörhead began collaborating with Brands For Fans to create an American whiskey that was breathtaking enough to wear the band’s logotype.

And– finally! – here is a fullbodied spiced whiskey with flavours of caramel, dried fruits, nuts and oak. It’s so good that it deserves to be named after one of the greatest songs ever written. The band member’s commitment to both projects have played a crucial part in bringing out these amazing products. Just like the band itself they both have “classic” written all over them.