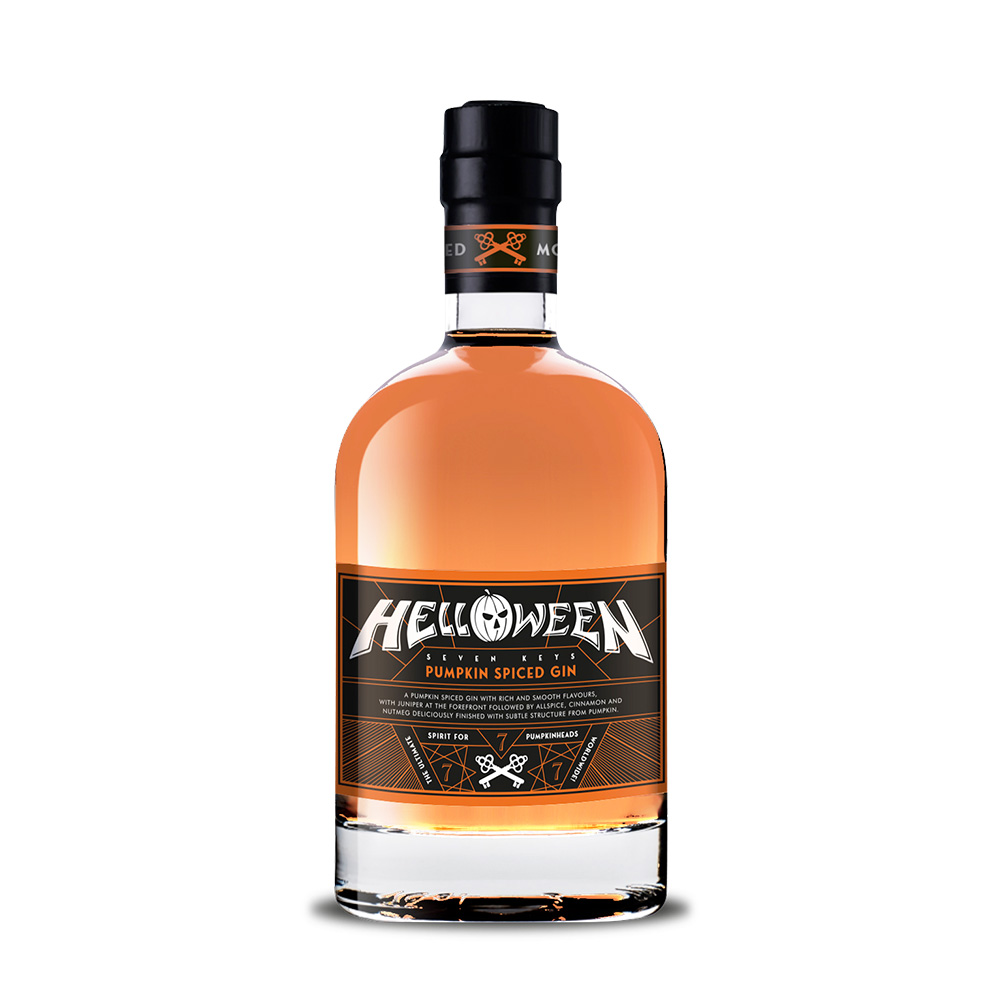 Helloween proudly announce the launch of Seven Keys Pumpkin Spiced Gin – The Ultimate Spirit for Pumpkinheads out there!

When Helloween decides to do something, it is never done halfway. Always full on and by their rules. Same thing when the discussion about making a unique beverage for their fans started a couple of months ago. After looking for a partner in the spirit business to create a gin with the vision that the band had in mind, Brands For Fans stood out in the way of working with artists and drinks.

“Being a Gin lover myself, our collaboration with Brands For Fans was very exciting to me. We had the chance to design our own unique flavour note, and the result is nothing less than my new favourite drink! To top it off, we’re even able to share this extraordinary, pumpkin flavoured Gin with our fans!” says Andi Deris.

With the united line up – now seven Helloween members – the band immediately grabbed the crown and reached the No 1 chart position in Germany and Spain with their latest album ‘HELLOWEEN’ and furthermore top chart entries worldwide. A huge success but until today, Helloween’s Keeper Of The Seven Keys Part 1 & Part 2 still remain the measuring stick! And the circles close right here: The number seven and keys in particular run through everything they’ve done in the last 30 years, so the name was an obvious choice. And it is a spectacular name for a gin!

After making a comeback in the 1980s, the interest in gin has grown exponentially in the 2000s and consumers are overflooded with traditional gins. There are very few pumpkin spiced gins on the market and now Seven Keys Pumpkin Spiced Gin comes with a unique, bold, and fascinating flavour profile.

The label design is made with Pumpkins United and is built upon the hit record Keeper of the Seven Keys. To make it stand out even more there are some elements of Art Deco pattern and strong orange, black and white colouring.

TASTE PROFILE: A pumpkin spiced gin with rich and smooth flavours, with juniper at the forefront followed by allspice, cinnamon and nutmeg deliciously finished with subtle structure from pumpkin.

HELLOWEEN is one of the most respectable German metal exports and pioneers of German melodic speed metal. On the road since 1984, HELLOWEEN performed on all important festivals globally: Rock in Rio, Wacken, Loudpark in Japan or the Polish Woodstock, thrilling more than half a million fans as the headliner. Looking back on a more than three decades lasting world career, the band toured the world countless times and delivered spectacular shows with fellow musicians such as Iron Maiden, Scorpions or Ozzy Osbourne. HELLOWEEN released 16 studio and 4 live records, achieved, and was honoured with 14 Gold and 6 Platinum-Awards and sold more than 10 million albums. The “Keeper” records are counting to one of the most successful German metal records of all time and are reckoned internationally as absolute milestones of power metal.